This is part two of the series. See the introduction and post list here.
When I began to write about my college sickness and depression, I found it emotionally difficult to recount some specific stories. My writing teachers always say ‘show don’t tell’ – meaning in part that specific stories are better than generalities. I hope you will forgive my generalities in this part, because the stories are difficult. Also my parents… are good parents in many ways, but they did not understand my depression and frequently added to the stress and shame of depression while trying to help me be a more godly person. They didn’t intend to hurt me — except when they thought I needed it for my own good — but despite their intentions to be godly parents they did hurt me deeply, and I cannot avoid that fact in this section especially. I wonder sometimes how my life would be different if we had believed depression existed. I write this series and hope that people will understand the damage that can be done by denying mental illnesses.)

I became sick with a bad cold during Christmas break 2006, my first year of college.
It never went away, and became all-over body aches and exhaustion before January ended.
I was a high-stress perfectionist student on top of that.
I was weepy, home relationships were strained (which became cyclically both a cause and effect of emotional pain), and I threw myself deeper into praying and schoolwork, and fighting to feel happy despite the stress. My unhappiness at home had my parents claiming I didn’t really love them. I once tried to explain that I was trying very hard to be happy, but that further offended them. I suppose they thought if I really loved them I wouldn’t have to fight. I didn’t know why it was such a struggle, but it was. I know now it was partly depression and partly that I didn’t feel safe in an environment where I was judged for the emotions I did my best to control but never could.

I was full of sadness and had trouble coping with everything. I was always tired and had trouble concentrating on my work frequently. I felt sick constantly. Luke, now my husband, was my best friend at the time. He was both a source of comfort and trouble — trouble because, in purity/courtship culture, mixed-gender friendships are frowned on as emotionally impure, unless you plan to get married.

I didn’t want to throw away my best friendship I had ever had, so I didn’t end it (best decision ever), but I prayed and prayed God would protect us from emotional impurity. At the same time, I didn’t confide in Luke and get as much comfort from my only friend who seemed to understand, because of that fear of ‘giving away a piece of my heart’. (I think now that most of this ’emotional purity’ stuff was useless worry and stress. Would a male best friend really wreck my relationship with any other man if I didn’t marry the best friend? I think that’s unlikely. But at the time I was terrified he would marry someone else, and frustrated because I felt that flirting or taking initiative in the relationship was sinful.) My parents were very invested in my emotional purity, heaping on me an extra layer of shame and fear of messing up; they were counting on me to stay true to the purity teachings, and I was terrified to fail them.

I was dealing with fear about ’emotional impurity,’ plus I was trying to get straight As in college, cope with family stress and help a very emotional pregnant mother, do chores, help with my siblings, all while dealing with depression and periodic hypomanic/depressive mixed episodes with no understanding and very little support.

In retrospect, I think I did a pretty awesome job to still be alive.

But at the time, I didn’t understand why I handled everything so poorly. Why I couldn’t just feel happy. Why I cried so much. Why I couldn’t help but hit myself hard where bruises wouldn’t show, why I wanted to kill myself, why the future looked so bleak when I had a big strong almighty God I was supposed to be trusting.

What was I doing wrong?
I prayed for joy. I prayed that God would reveal to me any sins I had sinned unknowingly so I could repent — I wondered if I was being punished for something I didn’t know was wrong. Everything I knew about God indicated he worked like that.
I sometimes had panic attacks at night — only I didn’t know they were panic attacks. I thought I was being attacked by demons, either as a test for God to strengthen me, or because I’d had an evil attitude and invited them into the house (giving the devil a foothold).

I didn’t understand why God didn’t care more about me — in a way that felt caring. They say God disciplines and tests (refines) the children he loves, but I wanted a God who would hold me and cut me some slack. I thought perhaps if I could just fight harder to be happy, just trust more, just worry less, then I would be happy. I had dreams of being a missionary and didn’t know how I would manage living a deprived life when I was handling college so poorly.

The most understanding advice I got was that everyone got discouraged sometimes and God is good, hold on. The least encouraging advice was that I didn’t really love God or trust him at all.

But I knew I was trying so hard. Since it obviously wasn’t working, no one would believe I was, but I was doing the best I could. If God was merciful and graceful and loving, I would have thought it would have been enough. My parents — and people in general — often judged how hard I was trying by results, but they made serious assumptions about my starting point. And I was starting pretty far behind when it came to happiness.

The misery continued. The depression, which I never imagined was real, made me sicker. I didn’t get better over summer break, like my mother expected.

I did in fact go to some doctors after eight months of being sick. One doctor thought I was stressed, that there was nothing really wrong with me, and she offered anti-depressants for the stress. Of course I refused, medication being evil and me being sick, not depressed — or so I thought. I took antibiotics, which only made me feel nauseous. I went on a strict, almost carb-free diet because my mom suspected candida was behind everything. I had no more yeast infections for years, but it didn’t cure me of my many symptoms, it only made me weaker from lack of nutrition. Friends began worrying about my weight, although only Luke’s mom said anything at the time. 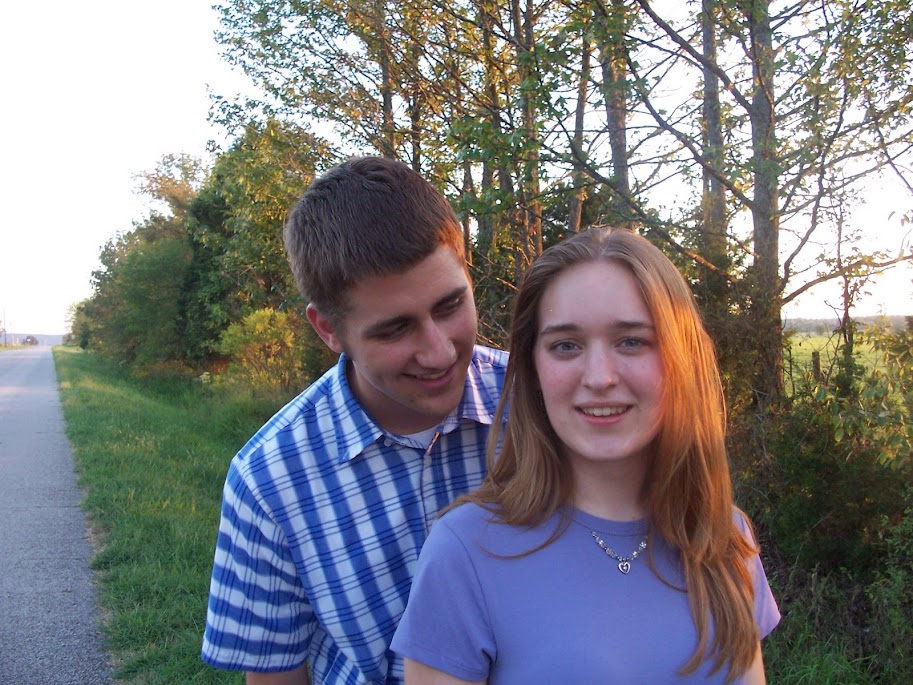 At the beginning of the second fall semester, Luke and I began courting (for us it was like engagement, but the ring came later, at Christmas). It was a very happy time, but also stressful. Courtship brings your parents and families into your relationship more than usual, and while my parents felt like they should be more involved, we felt like there were a lot of extra fingers in our pie. But what can you do, that’s what courtship should be, right? I didn’t even consider objecting when my mother continued to read all my emailed correspondence with Luke. The new relationship and my parents’ continued concerns for us to be ‘godly’ added new stress to all family dynamics. I feel sorry for the pressure my parents felt, although they invited it on themselves. As the young female, I had the least agency in this confusing circle of relationships and felt like I was stuck in the middle. Plus, relationships are just hard sometimes. Depression compounded all of this, and I was frequently sad when I was expected to be happy.
Furthermore, my parents, my mother especially, were very strongly in favor of a no-touch courtship to protect us from impurity. They felt very strongly they should protect us from ourselves and indicated they wouldn’t be able to trust us alone if they knew we were touching. God designed touch to be a fire that quickly led to consummation, said my mother. (My mother-in-law, to my surprise, recently pointed out that this would not have been anything near the end of the world.) Frightened of what romantic touch might do to our judgement, and of requiring constant watching, we agreed to a no-touch courtship and engagement. 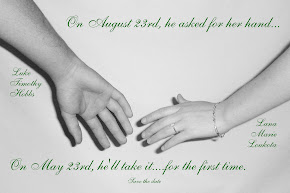 I missed those loving man hugs, even though I had never experienced them. Just a hug, an arm around the shoulder to be comforted during my many tears during that difficult courtship and depression.
Writing this reminds me of the terrible feeling of loneliness and confusion. I keep getting up to find Luke for a hug, because my mind feels like I am trapped there again, but I know I’m not.

We finally got married May 23, 2008, after nine months of courtship and two years of college.
It was a very good time for us, even though I still was ‘sick’ and struggling with intermittent depression. Although I’ve only had a few really deep depressions since then, I have had very few periods of health and full mental clarity that were longer than a couple weeks since I first got sick my first year of college at age 18. I’m 25.

I wish I hadn’t been taught what I was taught about depression. I wish I had believed depression was real, chemical, and not my fault. This section of my life that could have been happier (but still would have been difficult) was clouded by depression, dark fogginess, and pain caused by stress and depression.

We couldn’t figure out the sickness, but the sadness I knew about — I just wasn’t a very good person, and I was lucky God loved me as much as he did, even if he didn’t love me the way I wanted.*  I wanted to feel loved, but I took it on faith that God did love me, and squashed my doubts with the Bible.

The idea that I had a highly treatable mental illness never crossed my mind.

One day, though, I would read something from someone actually admitting, not condemning or denying, mental illness, and that would begin a very slow change.

*As noted in other sections, I no longer identify as Christian. I also do not believe the Bible teaches what I believed about depression and God making it go away. People differ on what the Bible actually teaches about God, but let’s not debate that here. The point is, with the things I’d been taught about God and depression, and with God not helping me with my unrecognized depression despite all my praying and trusting and trying to do my part, you can imagine that Christianity doesn’t appeal to me anymore.

7 thoughts on “Mental Health: from Shame to Seeking Help – part two: the Shame of Failing to be Happy”

off the beaten path

a comic about mental health by Clay Jonathan

An ongoing exploration of faith, culture, myth, life, art. An advocate for all who are trapped in nightmares.

I shall go to the house at Eridu. I shall utter a prayer to the deep sweet waters.

No matter how you read the Blog title, it's me!

naming the results of a kjv-literalist homelife

Heresy in the Heartland

Memoirs of a Wounded Healer

No Points For Style

People who equate truth with fact are missing the point.